Ghost towns don't have to be haunted. Technically, "ghost town" just means a place that's lost most of its residents. Picture it: a vacant street, shattered windows and chipped shudders. (Many rustbelt American cities also now reflect this phenomenon -- without the blowing tumbleweed.) Ghost towns are most common in the American west, where communities had once been hastily established around delicate economies. Often these were slashed by natural disaster, man-made blunders, and even highway construction. But in the rare absence people, a new kind of life can flourish.

Off Route 66 there is a place that's part-ghost town and part... art project. Inspired by the postwar deterioration of Red Oak, Missouri, the artist Lowell Davis decided to recreate his lonely hometown in abandoned space just a few miles northeast of Carthage, Missouri. Dubbed Red Oak II, Lowell has masterminded an entire neighborhood out of paintings and sculptures recycled from the forgotten remnants of nearby rural ghost towns. Red Oak II now exists as a tribute to the past, and a colorful addition to our present. A town in and of itself, this grand experiment is the ultimate road trip stop. Take a look below for more unique art history, and a glimpse into the magnificently American Red Oak II.

The Story of Red Oak II

Lowell Davis has been hailed as the "Norman Rockwell of Rural Art." And it checks out. When the multi-media artist began building Red Oak II in 1974, an obsession for nostalgia drove the design process. His description of growing up in the original Red Oak, Missouri sounds almost mythical today: raised in the back of the local general store, everyone in the town was Lowell's family. Literally. The lives of community members were completely intertwined. His great-grandfather was the first to ever plow a field in Red Oak. His grandpa owned the blacksmith shop. His father ran the gas station. Davis first left Red Oak to serve during World War II, in the air force. Following his service, he got a job as creative director in the Dallas-Fort Worth area. After 13 years there in Dallas, homesickness drove Lowell back to Red Oak. But nothing was how he remembered it. Red Oak seemed nearly invisible; his patchwork of relatives up and left, dispersed to bigger cities like Joplin, St. Louis, or Springfield.

So Lowell Davis moved along as well. He set up in a vacant cornfield near Carthage, Missouri with dreams of starting his own farm. But back in Red Hook, familiar haunts plagued him. In Davis' own words: "The general store, it went vacant, and there was no one running it any longer, and it was falling apart, so I just had to save it. I just packed it up and moved it here, put it back together and furnished it all up like an old general store." And Red Oak II was born. And the new old general store? "That was just my house." Davis didn't just rebuild his past -- he moved inside of it. 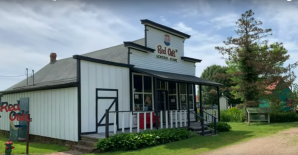 Over the next decade, Lowell Davis moved entire old buildings from their original homesteads, branching out from Red Oak to collect from other rural communities. During the 1970's the cost of moving a building was just $450. Davis' invention continued to grow, borrowing from the little towns neighboring Missouri, Kansas, and Oklahoma. From there, the transported structures were refurbished, embellished, and painted in deep country hues. Noting the wear of history, their layout in Red Oak II is meaningfully punctuated with the presence of rusty antiques: vehicles, biplanes, even skeleton figurines. In addition to several homes (now occupied by real families), Davis' immense undertaking now includes a schoolhouse, a Phillips 66 station, a town hall, a schoolhouse, feed store, diner, and even a jail. 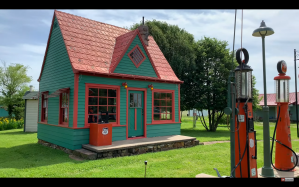 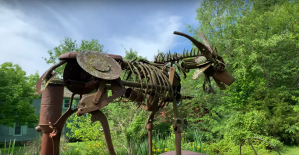 And as long as Lowell Davis retained ownership of Red Oak II, he never charged admission.

"I didn't build Red Oak for money," Davis said in conversation with Cecil Stehlin for Route Magazine. "I just like to see people enjoying themselves, and kids coming out and playing and enjoying church and people. That's my payment. I sit on the front porch and watch them and spend my day that way." But in his old age, Davis, unable to maintain the project alone, sold off the individual buildings which make up the town of Red Oak II. The houses turned out to be in high demand. To many folks, Red Oak II is not a ghost town. It's a dream of a simpler time. New residents can exist peacefully in this quiet, stylized sliver of Americana. 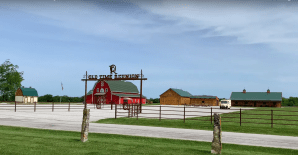 But Lowell Davis never did sell his old general store. He remained living inside the reimagination of his childhood home, along with his wife Rose, until his recent death on November 2, 2020. But Lowell Davis will live on in his ultimate creation, and in the contemplative admiration that visitors engage in while strolling down Red Oak II's meticulous, mesmerizing Mother Road. For at least another century to come.

Searching for your next adventure? Find it at our Wide Open Roads Facebook!

This article was originally published to Rare.us on March 24, 2021.

READ MORE: The Haunted Horton Mine is Nevada's Creepiest Destination